Web design encompasses many different skills and disciplines in the production and maintenance of websites. The different areas of web design include web graphic design; interface design; authoring, including standardized code and proprietary software; user experience design; and search engine optimization. Often many individuals will work in teams covering different aspects of the design process, although some designers will cover them all.[1] The term “web design” is normally used to describe the design process relating to the front-end (client-side) design of a website including writing markup. Web design partially overlaps web engineering in the broader scope of web development. Web designers are expected to have an awareness of usability and if their role involves creating markup then they are also expected to be up to date with web accessibility guidelines. 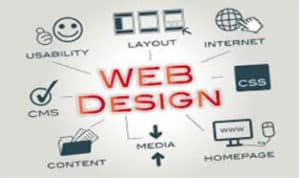 The start of the web and web design

In 1989, whilst working at CERN Tim Berners-Lee proposed to create a global hypertext project, which later became known as the World Wide Web. From 1991 to 1993 the World Wide Web was born. Text-only pages could be viewed using a simple line-mode browser.[2] In 1993 Marc Andreessen and Eric Bina created the Mosaic browser. At the time there were multiple browsers, however, the majority of them! were Unix-based and naturally text heavy.

There had been no integrated approach to graphic design elements such as images or sounds. The Mosaic browser broke this mold.[3] The W3C was created in October 1994 to “lead the World Wide Web to its full potential by developing common protocols that promote its evolution and ensure its interoperability.”[4] This discouraged any one company from monopolizing a propriety browser and programming language, which could have altered the effect of the World Wide Web as a whole.

The W3C continues to set standards, which can today be seen with JavaScript and other languages. In 1994 Andreessen formed Mosaic Communications Corp. that later became known as Netscape Communications, the Netscape 0.9 browser. Netscape created its own HTML tags without regard to the traditional standards process. For example, Netscape 1.1 included tags for changing background colors and formatting text with tables on web pages. Throughout 1996 to 1999 the browser wars began, as Microsoft and Netscape fought for ultimate browser dominance. During this time there were many new technologies in the field, notably Cascading Style Sheets, JavaScript, and Dynamic HTML. On the whole, the browser competition did lead to many positive creations and helped web design evolve at a rapid pace.[5]

In 1996, Microsoft released its first competitive browser, which was complete with its own features and HTML tags. It was also the first browser to support style sheets, which at the time was seen as an obscure authoring technique and is today an important aspect of web design.[5] The HTML markup for tables was originally intended for displaying tabular data. However, designers quickly realized the potential of using HTML tables for creating the complex, multi-column layouts that were otherwise not possible.

At this time, design and good aesthetics seemed to take precedence over good mark-up structure, and little attention was paid to semantics and web accessibility. HTML sites were limited in their design options, even more so with earlier versions of HTML.

To create complex designs, many web designers had to use complicated table structures or even use blank spacer .GIF images to stop empty table cells from collapsing.[6] CSS was introduced in December 1996 by the W3C to support presentation and layout. This allowed HTML code to be semantic rather than both semantic and presentational, and improved web accessibility, see tableless web design.

In 1996, Flash (originally known as FutureSplash) was developed! At the time, the Flash content development tool was relatively simple compared to now, using basic layout and drawing tools! a limited precursor to ActionScript, and a timeline, but it enabled web designers to go beyond the point of HTML, animated GIFs, and JavaScript.

However, because Flash required a plug-in, many web developers avoided using it for fear of limiting their market share due to lack of compatibility. Instead, designers reverted to gif animations (if they didn’t forego using motion graphics altogether) and JavaScript for widgets. But the benefits of Flash made it popular enough among specific target markets to eventually work its way to the vast majority of browsers, and powerful enough to be used to develop entire sites.[6]