VLE Vivek’s transformation from a store helper to the owner of 4 offices in Patna is a must read.

Coming from a lower middle class family, Vivek had to start earning for his livelihood very early in life. It was the year 2005 when he moved from his village, Patna City Rural to the main Patna City. Vivek’s journey started by working as a cleaning staff member at a computer institute named Computer Network Study Centre. Since those days, he was inclined towards the world of technology and the centre owner was generous enough to allow Vivek attend computer classes while working there. This short stint made Vivek acquire basic knowledge about computers and the digital world.

The very next year, Vivek joined a shoe store as a salesman while studying in class 12. Once in the absence of the store manager, Vivek took the charge of issuing bills to customers along with delivering his normal duties. This additional responsibility soon caught the attention of the store owner who further appointed him as the senior salesman.

In the next two years, Vivek worked with a few famous companies namely Reliance and BSNL as a Customer Care Executive. This experience helped him in sharpening his customer handling skills.

Vivek’s focus never shifted from education; simultaneously, he successfully completed graduation from Patna University. One of his colleagues in the last working place intimated him about Common Service Centre and the idea of setting something of his own. This immediately struck him and Vivek started acquiring information about CSC and its joining process. After completing the basic formalities, his CSC ID was generated in February 2017.

As per him, “I was really excited on getting to know about CSC and was extremely eager to open my own centre. My job did not allow me to devote much time in this direction. Post working hours, most of the time was dedicated in understanding CSC and its services. I used to open the portal on a daily basis; however no progress was made in the first one year. Soon I realized that my business cannot run while being a part of the job. Hence, I quit everything on March 3, 2018, andwith lots of hopes and aspirations, I began on this new journey of mine.”

Vivek started meeting many people and attending all meetings of CSC to gain further information about various services being offered. It was imperative to reach out to customers in the beginning; consequently Vivek went from door to door informing people about his centre. Getting up early to distribute pamphlets along with newspapers became a daily task.

His District Manager, Mr. Kumar Shitij apprised him about the opportunity of making Aadhar cards for children below the age of 5 years. Post clearance of an exam, Vivek became the supervisor and his operator ID was generated. He was told that a tablet and a biometric device were quintessential for this task. Vivek had to take a loan to buy these necessary equipments owing to his weak financial condition.

To his surprise, villagers were not willing to get Aadhar card made for their children that too free of cost. Vivek went to the nearby Anganwadi centre where he was told that cards could not be made without a formal approval.

Such hurdles never stopped Vivek; he went to meet the senior officials along with CSC certificate and a poster of Child Aadhar. Once the officer was satisfied with Vivek’s intention and identity, he was authorized to make Aadhar cards for children in the entire city.

Vivek started working for 18 hours a day and did not leave any stone unturned in the process of Aadhar registration. Within a short duration of 2 months, Vivek could manage generating more than 8000 Aadhar cards. On April 4, 2019, Vivek received his first payment from CSC and this fund was utilized in buying a printer, lamination machine and other basic office equipments.

2 hours before the commencement of office hours, Vivek used to distribute pamphlets which talked about innumerous services being offered through his centre. Within the next 10 months, more than 5,000 PAN cards were generated and Vivek’s CSC started getting immensely popular amongst people. Customers were given the benefit of acquiring these services from their door step at a reasonable price.

Vivek says, “There was a serious lack of awareness amongst local people about the value of many government schemes. Few projects like PMGDisha and Economic Census could not pick up pace due to the same. Marketing was completely my sector wherein I started spreading awareness about CSC in all nearby areas with the help of Village Sarpanch and other ward officers. I followed a simple motto for the customers – If you are not happy with our services, tell us; otherwise tell others.”

Many major camps were set up by Vivek and his team. Considerable number of people and other VLEs participated in these camps. Over 3000 Ayushman Cards were generated which allowed poor villagers to get themselves treated at nearby hospitals free of cost.

Vivek recollects the case of Smt. Shanti Devi who underwent an operation for her eye. Living in a small rented room away from her kids and family, it was not possible for Shanti to accumulate money for her treatment. Vivek got her Ayushman Card made through which she was able to successfully undergo the operation with no extra cost.

Smt. Swati Kumari was shifted from Muzaffarpur to Patna owing to her critical condition post the delivery operation. Within one day, Vivek, with the help of CSC official, Mr. Mudit Mani, made sure that her Ayushman Card was made and she could be relieved from this economic burden. Today, she is living a healthy life with her child.

Many other services are provided at Vivek’s centre such as Tele medicine, Tele Law, ITR filling etc. Notably, more than 10,000 beneficiaries were recorded under the elabharti scheme wherein people above 60 years of age, widows and disabled individuals were entitled to a pension of Rs 400.

Currently, Vivek operates from 4 offices in Patna city where 15 people are employed. Each centre is equipped with laptops, printer, classrooms etc. According to him, “I was always inclined towards setting up my own business and wanted to give people jobs instead of working for others. Today I am happy that I could live up this dream and will continue to strive in the same direction. My doors are always open for other VLEs for any kind of assistance in running their individual centres. I do not want my VLE brothers and sisters to face similar issues as the ones that I encountered in the beginning.” 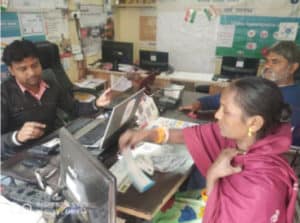