SUCCESS STORY OF VLE AJIT FROM DHANBAD DISTRICT OF JHARKHAND

SUCCESS STORY OF VLE AJIT FROM DHANBAD DISTRICT OF JHARKHAND

Life always poses unprecedented challenges in front of us. Some decide to give up while others showcase their true character during tough times. Such is the case of Ajit Sharma who not only stood firmly against all odds, but rose above them. This story coming from Patardih village in Dhanbad district of Jharkhand will motivate each one of us to run that extra mile in order to change our situation positively.

Ajit’s father was a farmer and agriculture was the main source of income for his family. Unfortunately, his father passed away while he was in 10th standard. Consequently, he had to give up on his studies and this led to him working as a house-help in one of the nearby homes. Ajit recollects, “The entire responsibility of my family was on my shoulders now. I used to work during the day and study at night. This continued for three years amidst which I successfully completed senior secondary education. I was staying with the family for whom I used to work; they were taking care of my essential needs in return of my services. Post marriage, I decided to quit this work and start something of my own.”

With this thought in mind, Ajit acquired a loan of Rs 10,000 from the local bank in order to open a small shop. He brought a printer amongst other necessary items required to operate smoothly. He ran the shop for over a year barely managing his family expenses. One day, a customer apprised him about the concept of the Common Service Centre and how he can add a lot more services in the existing setup. This idea immediately caught up his attention and Ajit started gathering more information about CSC.

Thus, it was in May 2016 when his CSC journey began. His District manager supported him a lot in the nascent stage of operating CSC. As per Ajit,”Poverty is the main issue in my area and most of the villagers cannot afford basic health care facilities. Thus, Ayushman cards played a major role in this regard. Initially, people were not aware about anything of this sort and it took me some time and considerable effort to convince everyone to get their cards made. Slowly, people started showing up on my centre and we generated more than 6,500 cards over a period of six months. A female in the village suffering from heavy migraine got herself treated at the nearby government hospital free of cost. I still remember that I went to her home to get the card made.” Camps were set up in the nearby panchayats wherein people came and got registered under the scheme. Some of the patients were given consultations via Tele-medicine as well.

After healthcare, Ajit also worked in the direction of making villagers digitally literate by enrolling them under the PMGDisha scheme. Around 80 people completed their certification through PMGDisha and many of them ended up opening their own centres or small shops. Through a small step, so many disillusioned youngsters were set on the right path.

During the times of economic census, 8 people were employed as enumerators who collected surveys from over 800 homes in the same panchayat. People also took advantage of a number of other Government-to-citizen services like PAN Card generation etc. 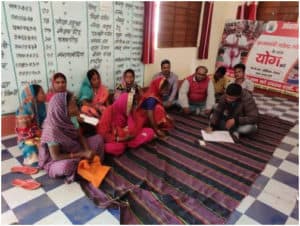