CSC Vle Would Be Soon Supported In Selling Laptop and Tablets Through CSC Grameen eStore.

The government is close to moving a cabinet note to get approval for a budget of Rs 7,300 crore for a production-linked incentive (PLI) scheme aimed at boosting the manufacture of laptops, tablets and servers in India.

Officials said the contours of the scheme are being finalised and the approval could come through as early as January.

The target is to move close to 20-30% of the global production of laptops, tablets and servers to India, the officials said. The government has reached out to HP, Dell and Lenovo to get their feedback on the scheme.

Companies had earlier urged the government to come up with incentives for laptop and desktop manufacturing in India, which would be similar to the scheme offered to mobile phone manufacturers. The Ministry of Electronics and Information Technology (MEITY) is chalking out the final details of the scheme, which is likely to be announced over the next two-three weeks.

Electronics and IT Minister Ravi Shankar Prasad last week said that the government has set a domestic manufacturing target of 50 million hardware devices including laptops in the next five years. “I am not going to stop at mobile phones. By 2025, we will manufacture 1 billion mobile phones, 50 million TVs and 50 million hardware devices including laptop and tablets,” Prasad said during a virtual conference 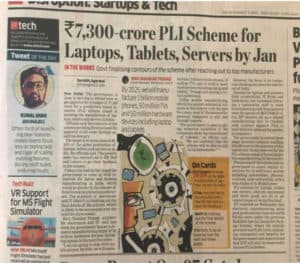