Guarantee free loan under PMSVA Nidhi Scheme can be applied through CSC. The scheme is a Central Sector Scheme i.e. fully funded by Ministry of Housing and Urban Affairs with the objectives: (i) To facilitate working capital loan up to Rs. 10,000; (ii) To incentivize regular repayment; and (iii) To reward digital transactions. The scheme helps formalize the street vendors with above objectives and will open up new opportunities to this sector to move up the economic ladder. CSCs will help vendors’ enrollment in the scheme. 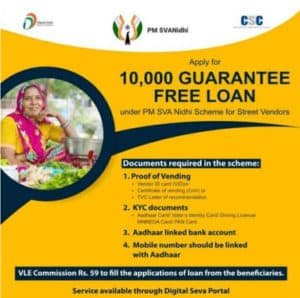